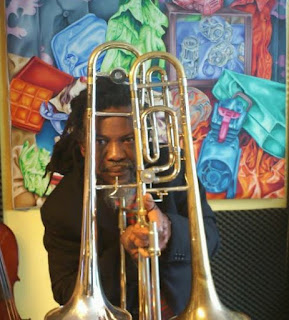 PierreChabrèle is a class act, a visionary trombonist with a totally identifiable sound and superb swing.

His flamboyant & unique trombone style knows no borders. Yet, Chabrèle’s extraordinary talents don’t stop there, he is a versatile multi-instrumentalist, multifaceted composer, eclectic  arranger and accomplished producer.
In other words, a total musician, whose professional career spans over 30 years..
As a child, Pierre Chabrèle starts playing music instinctively. He takes up trombone when he arrives in Paris at the age of 19 after having studied guitar, bass guitar and percussion in the Caribbean  where he was born in 1962.

The first two years in Paris, Pierre Chabrèle is active in the West Indian music scene. To complement this, he takes classical music classes at the conservatory for 8 years where his teacher is Jacques Toulon, a soloist with the Orchestra de Paris. This meeting would change his life.
His talent is spotted very quickly by some of the big names in the music business and in 1985 he embarks on an international career playing music professionally around the globe. Since then, Pierre Chabrèle has explored almost every musical form and performed with some of the greats including: Touré Kunda, Youssou N’Dour, Alpha Blondy, Kassav, Tiken Jah Fakoly, Percy Sledge ...

1993 sees the birth of Chabrèle’s group Clan Destin which criss-crosses Afro-Caribbean rhythms with high-energy funk and groove influences. The band is slick and professional in the traditional Afro-Caribbean style yet with a sound that is totally contemporary.
In 1996, he revives Kalpata, a group he’d originally started before leaving his native Martinique. This music is more culture-based, reflecting Pierre Chabrèle’s own culture, celebrating the legacy of his Afro-Caribbean roots and his multiethnic influences.

Since 1999 he’s been performing regularly with Makaïa, Boney Fields and the Bone’s Project , Gospel pour 100 voix, amongst others who include some of his compositions & arrangements in their group repertoires.
Since 2004, Pierre Chabrèle has been involved in the creation of several groups and music projects.

•   Kompabrass, a brass band collective which takes the greatest of the great Haitian compas classics and readapts them for the wildest of wild horns.

•   Melting Point, Paris-based jazz fusion septet whose members come from the cream of the Paris jazz scene and the four corners of the world. A made-in-Paris style of Afro-Jazz.

•   The Creole Jazz Orchestra, a big band which continues the festive Creole Jazz tradition where musicians play & everyone dances. A sophisticated blend of tradition and modernity which goes beyond beguin. The Creole Jazz Project objective is to provide a musical platform for all Creole musicians & composers worldwide.

Since 2011, Pierre has been performing with the fabulous gospel and soul diva, Liz McComb.
A regular on TV alongside international stars such as  Lionel Richie, Khaled, Paul Anka, Michael Bublé. Pierre Chabrèles compositions are also featured as credits.

Pierre Chabrèle’s music is a festive fusion of diverse musical forms. It’s innovative, refined and jubilant. One of the most talented and inventive musicians of his generation, Pierre Chabrèle is continuously experimenting, arranging and reinventing music for the future.
His latest piece of music, Salty Kiss can be found here. Enjoy!!!